Part of Lonnie Martin’s ongoing MFA blog — Stranger in a Strange Land — where he tells us all about moving to Prague to drink beer and make arthouse movies for a living. Updated weekly. His wife is also blogging about the experience.

I was still half asleep when I first saw Prague. The plane had barely descended through the clouds and the misty cloud cover through the window mirrored the haziness of my consciousness. I thought I was still dreaming.

From above, the city looked like a sci-fi fantasy. Squat utilitarian (or is it totalitarian?) building complexes beside baroque row houses were nestled amongst patches of green rolling hills. Prague was hillier than I thought it would be. Topographically, the city is similar to San Francisco only instead of the expanse of the San Francisco Bay, the water source is the serpentine Vltava River (pronounced VAL-ta-va) which runs through the city center.

As we passed over Old Town, I spied Pražský Hrad, or Prague Castle, a spired Tolkien fantasy through whose window I’m sure I saw Katniss Evergreen fighting Lord Voldemort. Two Imperial tie fighters and a dragon escorted our plane to the airport runway where we were greeted by Dr. Hans Zarkov and his Republican Guard of X-Men.

Okay, that last bit didn’t happen but you get the idea.

At customs, a young, handsome, but dour Czech official looked over my passport silently. He gave me and my wife’s Vera Bradley bag a cursory look, stamped my visa, then sent me through. Not a word passed between us. My only previous customs experiences being at the U.S. border crossing to and from Canada and Mexico, this struck me as all too easy and I became certain I was about to enter the second act of a Jason Bourne movie.

A quick digression about customs: I think you can tell a lot about a country by how they treat you at customs. Going into Mexico, for example, is like going through a toll booth disguised as a cheap travel agency where they tell you about all the great places to go and shop. They’re practically begging you to stay as long as you want and spend as much money as possible. For people who are supposed to be shaking you down, Canadians are way too nice about it. They’re like, “Where you going? Peterborough, eh? You should go have a couple beers at “The Pig’s Ear.” Hell, I’m off in about three hours. I’ll meet you there for a pint.”

Crossing into the United States, you’re never more than a sneeze away from a three hour session of “WHO DO YOU WORK FOR?!” with some bored asshole who thinks he actually is Jason Bourne. This behavior is only justified by the fact that our most successful export is fear. No paranoia is purer than the stuff that says “Made in America.” If indeed the U.S. is the world’s biggest target, it’s only because you get what you give.

Cindy had been paranoid that British Airways would lose our luggage, but I had reclaimed it before she was even finished going through customs. (I thought her lack of a Vera Bradley bag might arouse suspicion, but I was wrong.) We stepped through the secured airport area and quickly spotted our landlady, Olga Grulichová, who had agreed to pick us up from the airport and give us a ride to our flat.

Olga is an artist who specializes in tapestries by way of ceramics and oil painting. If this strikes you as an odd evolution, it’s an interesting metaphor for the Czech national identity; first discovering an image (of self), then giving it dimension before finally exploring and reconstructing the layers that give it form. Near fifty, Olga seems both younger and older; hip yet with a regard for what has come before.

She also drives like a fucking maniac. Her excitement at having her four month tenants finally arrive was apparent, and during the drive she regaled us with tales of her American travels in a broken English that was only slightly better than my and Cindy’s nigh non-existent Czech. Meanwhile, the barely refereed motocross/auto polo match that is Prague traffic whirred around us. Speeding buses careened around corners. BMWs switched lanes without warning. Red light? Green light? Whatever. It’s Prague! Just make sure to change your underwear after.

We arrived at our flat nestled in a stretch of unmarked border between the neighborhoods of Vinohrady and Žižkov. Little more than a bedroom with a desk and wardrobe, a living area/kitchenette, and bathroom, I immediately found it modern, cozy, and perfect.

Olga offered coffee. It was then I realized that after nearly twenty-four hours of being awake, I had lost all sense of time. The sun was out. It was day. Sure, coffee sounded fine. I guess I was expecting a couple of mugs of that Nescafé that Europeans seem to love. However, I was pleasantly shocked when Olga returned with a tray bearing two lovely cups of cappuccino, cakes, and chocolate bars made with Czech wafers. It was this act that erased any misgivings I had about coming to Prague. Through the care taken in something as simple as a mid afternoon pick-me-up, Olga had said without words, “You are welcome here.” 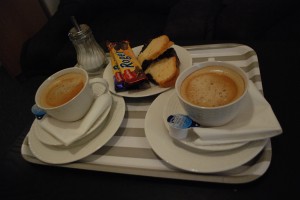 After unpacking, Cindy and I calculated roughly six hours to sunset. If we could make it to sunset, we could sleep, which was really all either of us wanted to do.

So we walked. We walked down the side streets of our neighborhood, zigzagging our way to Václavské Nám?stí, better known to English speakers as Wenceslas Square, and to locals as “that place with all the fucking tourists.” There was a festival going on I think. Or maybe it’s just that way all the time. It was like the parking lot for a Grateful Dead show mashed up with a Renaissance Faire in the middle of a shopping mall in Hobbiton. Some hippie played with devil sticks near two bagpipers in front of a posh restaurant while teenagers browsed H&M with their soda cups from KFC, barely avoiding the blindfolded swordsman covered in tattoos.

That last bit *did* happen. No shit.

We walked and walked. Then we walked a bit more before finally walking some more. Open squares gave way to tight cobblestoned alleys. It was like being trapped in a time warp of color and scent. Hours clicked by in what felt to have been days…or simply just moments. At some point, I noticed the sun was setting. It was time for dinner and a beer. We worked our way back towards our flat and found a small pub nestled on a side street. It was only recognizable by the ubiquitous Pilsner Urquell sign over the door.

Later, I’ll spend more time than you’d ever thought possible talking about the Czech tradition and culture of beer or “pivo.” However, it’s most famous export is Pilsner Urquell, which like Guinness tastes vastly different in it’s native country than in those countries which it is exported to. In the Czech Republic, pivo is an art form, a passion, a way of life. 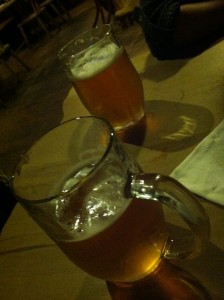 The entrance to the pub was just a foyer with a spiral staircase. We descended down into a dimly lit bar with tree branch awnings. Wooden tables and chairs lined textured stucco walls. It looked like Yoda’s home from The Empire Strikes Back, only warmer and cleaner with much higher ceilings. The bartender, who was barely old enough to shave, spoke virtually no English, but that was fine. Between his broken English, our broken Czech, and smiles at each others lacking, we came to an arrangement for food and pivo.

We returned to our flat and Cindy said she just couldn’t sleep without a shower. A shower seemed lovely, and I vowed to stay awake long enough to do so. It was my last thought before falling into a deep sleep.

Hours later I was awoken by a man and woman outside my window speaking in Czech. I recognized a few words; “hello,” “yes,” and “over there” I had a sneaking suspicion I was eavesdropping on some sort of transaction involving sex and money. I was wide awake. So was Cindy. It was only midnight. Cursed jet lag.

I showered. Afterwards, Cindy and I chatted about the trip, our day, and how we were never going to get back to sleep. Both of us pulled out our respective books; mine “Pink Tanks and Velvet Hangovers: An American in Prague” by Douglas Lytle, hers “We Are the Romani People” by Ian Hancock. We read. I drifted. Darkness unfolded. I must have dreamed, but of what is anyone’s guess.

My next conscious thought was of sunlight. It was morning. More importantly, it felt like morning. I checked the clock. 10am. A little later than normal, but that was fine. In fact that was just right. I got up, made an espresso, and thought about what I might do for the rest of the morning.

My first morning in Prague.