August 28, 2013    Comments Off on Off the Grid    Posted in: rottingcorpse, Stranger in a Strange Land, Travel

Part of Lonnie Martin’s ongoing blog — Stranger in a Strange Land — where he tells us all about moving to Prague to drink beer and make arthouse movies for a living. His wife is also blogging about the experience.

I’ve done so much walking during my first week in Prague, I barely know where to start. My legs are probably the best place as I’ve been made keenly aware of how much I haven’t been using them since leaving the States. All the miles and miles (or kilometers and kilometers if you’re Czech) of walking has created pain in parts of my lower body I can’t even pronounce. In English.

This is being written on my 38th birthday. I mention this because people are always telling me how young I look, and I’m not going to argue with them. I can still pass for close to thirty, and the occasional bank teller or hooker even mistakes me for a guy still in his twenties. You ever seen a hooker with prescription eyeglasses? It’s something.

My legs and lower back, however, have no illusions that 40 is coming down the pipe. That was never more evident than after my first few days of walking around Prague.

Prague is a very walkable city. It’s so walkable, one wonders how they ever got such a fantastic public transportation system built. The metro (subway) is quick and clean. The trams (trolleys) are easy to navigate and arrive often. I haven’t tried the buses yet, but they are out there if for some reason I can’t get anywhere by train, tram, or foot. The cabs must only be here for tourists, and maybe the hookers, who need to have some way of getting to their optometrist appointments.

A pox on the amazing public transport, at least for the first week. I’m a firm believer that the best way to get to know a city is to get lost in it. Prague has really been doing me a solid by making that super easy.

I’ve always prided myself on having a pretty good sense of direction, especially in an urban environment. After all, every road leads somewhere. The key in most (though not all) American cities is to just keep circling while spiraling out and look for familiar landmarks or street names. Not so in Prague.

See, most U.S. cities were designed. Many of the street patterns are gridded and make some sort of mathematical sense. Washington, DC for example is divided into four quadrants: NE, NW, SE, and SW with the Capitol Building forming the point where the four quadrants meet. Most major streets are named after numbers, letters, or States. Numbered streets go north/south. Lettered streets go east/west. State streets are diagonal at varying angles and converge at varying circles. While it can be confusing for tourists and newcomers, DC is navigable if you keep all the preceding facts in mind.

Prague, like most (though not all) European cities, was built on the ashes of various empires. There was no rhyme or reason to how roads and streets were built. They simply evolved. People set up shop near a water source. The king put his house on the hill. He set borders on the whim of his fancy and the strength of his army. He and many monarchs after him fell. Borders shifted. Towns grew up, down, and out. A building was built on the next available plot of land, whether it made sense or not. Streets are as straight as the lines in a Picasso painting.

This means if you’re headed north, a left isn’t necessarily going to take you west. It’ll go west for a second then snake around south before dead-ending and forcing you east. Next thing you know, you’re on a street you’ve never seen before in a part of town you didn’t want to go. So you turn right to back track, maybe seeing an alley that you’re sure will put you in the direction you want to go. But when you get to the end of that alley, you’re right back where you started with no idea how you got there.

That about sums up Staré Metso or Old Town Prague. I’ve spent hours trying to get out of Staré Metso only to end up right back where I started.

Like DC, Prague is a fairly flat city architecturally speaking. Locals tell you to use the tall exceptions, Pražský hrad (Prague Castle), Starom?stská radnice (the astronomical clock), Žižkovská televizní v?ž (the Zizkov TV Tower), etc. to get your heading. The problem is most of the alleys of Staré Metso are so tight, you can’t get enough distance between you and the buildings to see any distance.

It’s not just Staré Metso either. The whole city seems to confuse me, mostly due to the slowly crumbling, but still very much intact language barrier.

Therefore what happens is I take out the map and go, “Okay, past the square, straight on Vinohradská, left on Sázavská, another left on Slezská, and I’m right there!”

So I put the map away and walk. I get to Vinohradská and feel good about myself. I got this. My mind drifts. Yet having not gotten a good grasp of the Czech language, at least not yet, street names like “Sázavská” and “Slezská” don’t stick to my brain the way ones like “1st Street” and “Massachusetts Avenue” do.

Therefore when I see a street on my left called Šumavská, I think, “That’s the street I want, right? There’s an S, a V, and a K in it. It has to be!”

PROTIP: There’s seemingly an S, V, and K in just about every word in the Czech language.

So I’ve been walking, and walking. And after I’m done walking, I walk some more. My knees screamed the first day. Then the shin splints kicked in and I forgot all about my knees. On the third day my calves seized up, but that was nothing another eight hour day of walking wouldn’t cure. On the fourth day, I wondered if the backs of my knees were going to simply explode in some gelatinous cataclysm of goo and pain.

On the fifth day, everything suddenly felt pretty good. I’m assuming my legs just said, “Fuck it. This isn’t going to stop. We might as well shape up.” I also started walking less than I had been because I actually knew where I was going. There’s probably a message here about exercise and sticking with something. However, it’s probably written in Czech so I can’t understand it yet. Or maybe it’s too far away for me to see clearly.

Guess I should ask that hooker on the corner for directions to an optometrist. 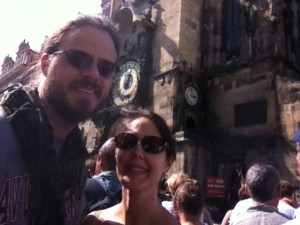 “Yes, I can see the Astrological Clock. We keep circling back to it! It’s like PURGATORY!!”