Part of Lonnie Martin’s ongoing MFA blog — Stranger in a Strange Land — where he tells us wage slaves all about what it’s like to move to Prague to drink beer and make arthouse movies for a living. Updated weekly.

I believe it was Einstein who postulated that the faster you go, the slower time moves. Or maybe that was just an old episode of The Flash.

At one point during the twelve hour adventure that got me and my wife from Washington, DC to Prague, I marveled at how it took Columbus two months to cross the Atlantic Ocean and now we can do it in just under six hours. While this thought did nothing to ease the pressure on my tailbone, it did remind me that things could be worse.

Before leaving, one of my main goals of the trip (besides of course getting there alive) was to minimize as much as possible the effects of jet lag. To assist in this, my wife Cindy had in a stroke of brilliance ordered us an overnight flight with a layover in London’s Heathrow Airport. The idea was to catch a nap on the six hour flight, grab breakfast in London, then hop over another two hours to Prague and stay up until nightfall at which point we’d pass out from exhaustion. It wouldn’t be a complete body clock reset, but it would be close.

Being amped up on adrenaline made sleep almost impossible but we weren’t helped by a group of loud and obnoxious French teenagers who were desperate to let the entire plane know how excited they were to go home. That the French were obnoxious I’ve always understood, but somehow just thought it was all poetry, wine and cigarettes, and the inability to win wars with the Germans. I tried desperately to let the antics of these kids slide off my back. After all, I’m a firm believer in karma. I was that loud teenager once. Hell, I’m still that loud teenager sometimes.

Not to digress too much, but as I approach middle age, teenagers represent all the possibilities and problems of the human race. Their energy and enthusiasm remind you of what we’re capable of. The passions of youth burn hotter than the brightest sun. That it’s unfocused is all the better because it symbolizes a world of endless possibly and potential. Teenagers are capable of doing just about anything they put their mind to should they decide where their passions lay.

They also make me want to write my senator about a forced sterilization bill. This is a fantasy of course, as a U.S. sterilization program would have no effect on the French. Still, it was a nice fantasy that kept me from killing young Pierre who wouldn’t turn the flash off on his camera. I wanted to shove that camera so far up his ass that he’d be farting light burst bolts for a week.

Once the French kids calmed down, I became acquainted with my other obstacle to slumber: a broken PA speaker almost directly above my seat that gave off quirky bursts of intermittent white noise. I can actually sleep through constant white noise. However, this static would stop without warning, yet only long enough for me to drift off before shocking me back awake. Even my wife, who had given up the illusion of napping and had tuned in to watch Identity Thief, took off her headphones multiple times to ask, “What is that static?”

Another passenger complained to the flight attendant, but it never got fixed. I became convinced it was the pilot and co-pilot having a laugh at my expense. I was sure they too were French. I couldn’t tell because even when the pilot spoke, all I heard was static and the occasional coded message.

Static and the French dubbed reenactment of Logan’s Run aside, I was amazed at how nice the British Airways flight accommodations were. I was lucky enough to be seated near the back of the plane where the tapering of the tail required removal of a seat from my aisle. Yet there was still space there for me to throw my gargantuan legs to the side and stretch out a bit. Plus, we got two free in-flight meals, and once I realized that sleep would be impossible, cup after cup of fine English Breakfast tea. 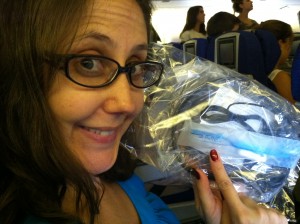 I had anticipated the “Battle of Heathrow” to be epic after hearing horror stories of missed flights due to the labyrinthine multiple terminals of the busiest airport in the world. We had given ourselves a three hour layover to make sure we had enough time. Even with everything going smoothly, it took well over an hour to switch terminals. With time to spare, we sat down for a relaxed breakfast where I resisted the urge to get a bloody mary. While we stretched our legs, I pondered two disturbing aspects of Heathrow:

First, there’s no room for error on the part of air traffic control. Zero. Planes are queued up like communist era bread lines. While my plane was taxiing toward the gate I looked out at the runway on which we had just landed to see another plane landing. Behind it, way closer than I thought comfortable, was another plane. Behind that one, there was another. Behind it, still another. That there aren’t more plane crashes simply baffles me. It seems the slightest miscalculation would just snowball into fiery chaos.

More disturbing to me is that Terminal 3 of Heathrow airport is a hellish, inescapable temple to consumerism; a purgatory where Black Friday never ends. It’s ironic that we get so thoroughly checked before entering the terminal, because it struck me that you could buy just about anything once inside. The Shoe Bomb Emporium is between the Harrod’s and Starbucks.

Despite the copious amounts of excellent tea, the sleep deprivation was starting to catch up to us. As we were shuttled from the gate to the tarmac, I began to drift. And though I vowed to stay awake on the two hour flight from London, I fell asleep almost immediately after take off, not waking up until the pilot came on the (working) PA to tell us we were about to land in Prague…