Stranger in a Strange Land: Tales from the Beard

“So,” a friend says to me the other day, “Since you’re going to Europe for four months, you’re shaving off your jihadist beard, right?”

“Well, you don’t want people to think you’re a terrorist… or worse, a hipster.”

“That’s pretty offensive,” I said. “Even terrorists don’t want to be called hipsters.”

In less than a week, my wife of ten years and I leave for four months in Prague, capital city of the Czech Republic. We’re going as part of a study abroad program for grad school. Well that’s why I’m going. My wife is going to see Europe. While I’m struggling to earn credits for my MFA in Film & Electronic Media using a language I don’t speak, she’ll be having drinks in cafés in various European countries.

That’s right. I’m a grad student. This means in two more years I’ll be qualified to be completely full of shit for a living. Honestly, I could do that without going into crippling debt but no one will hire me without the degree. I’m also a filmmaker. That makes me doubly qualified to be full of shit for a living. Why am I unemployed again? That’s right, because I don’t want a government job. *rim shot*

Not counting Canada and Mexico, I’ve only been out of the United States once. I spent a week in England with a friend and his parents the summer before I left for college. This was exactly twenty years ago. Yes, do the math. My lower back will do it with you and together you can laugh at how old I am.

However, I’ve traveled fairly extensively in North America. My philosophy on travel is pretty simple: avoid the tourist traps, eat and drink where the locals do, and most importantly, talk to as many people as possible. People are proud of where they live, even the ones who can’t wait to go somewhere else. To me, it’s all about seeing a place through the eyes of the people who live there. More importantly, it’s about trying to understand the people who live there.

At one point, I was concerned about going to a country where I don’t speak the language and the people there don’t really speak mine. Then a professor dropped this nugget on me: “As long as you don’t stop listening, it doesn’t matter if you and someone else speak another language. You’ll find a way to understand each other.”

Did I mention that Czech is an impossible language? Yes, it’s more Latin based than Cyrillic(1), but there’s enough of that crazy Russian shit in there to make it a bit of a slog. I’m focusing on the important phrases: “I don’t speak Czech very well.”  “Do you understand English?” “May I have another beer, please?” “Where is the bathroom?” “How much for the girl?” “Go fuck yourself, commie!” As long as I get these down, I don’t expect there to be any problems.

Unless they stem from the beard.

I mean, what if I get accosted by some al Qaeda guy who wants me to join? I could be walking down the street, minding my own business when a real jihadist could show up with a pamphlet, a catalogue, a copy of “Dianetics,” or whatever those crazy fuckers are using as part of their pyramid scheme.

“Hey, man. You’ve already got the beard. You’re halfway there. All we need now is $1,500 Canadian and your signature on this Non-Disclosure Agreement. Then you’re on your way to lovely, scenic Yemen. Don’t worry. Yemen’s great. Except for the mosquitos. You’ve seen Heavy Metal, right? Remember that thing Den rides off on with the naked girl? The small ones are about that big. That’s okay though. You needed a malaria shot for Prague anyway, right?”

Actually, the only recommended inoculation for traveling to the Czech Republic was Hepatitis A, which apparently all the kids get before college nowadays. Since I was also due for a tetanus shot, my wife and I made an appointment for a consultation at a travel clinic.

Once there, the doctor said, “Now I want to recommend also getting inoculated for Hepatitis B if you’re planning on traveling to Prague for any group sex activities.”

I turned to my wife. “We should get the Hep B, right?”

Besides, my beard is more radical hippie than jihadist. I mentioned this fact to my wife who replied, “Yeah, but haven’t you been researching a screenplay on the Manson Family for the past two years?”

It’s true. I have been. My computer is loaded with Google and YouTube searches for “Manson,” “Squeaky Fromme,” “Tate-Labianca Murders,” “Ford Assassination Attempt,” and “Prague Group Sex Travel.” Since I plan on working on the script while in Prague, I’m bringing a variety of Manson books that can only be described as “fucking creepy.” Explaining them at customs when I get pulled aside for my jihadist beard could be difficult.

CUSTOMS OFFICIAL: “Why do you have all these books on Manson?”

ME: “It’s research for a film project.”

CUSTOMS OFFICIAL:  “On the Manson family?”

You know what though? I’m keeping the beard. I like it. It’ll keep my face warm during the Prague winter. And if some small minded individual wants to gives me flack for it, or my keffiyeh, or dressing like a killer hippie, that’s their problem. I’m just going to smile and walk away. I will not judge them. I will not engage in conflict. After all, I’m an ambassador now. I’m representing the United States, a flawed country to be sure, but one I love nonetheless.

But the first person who calls me a hipster is getting punched in the face. 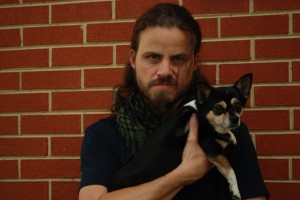 “Drop that can of PBR or the chihuahua gets it!”

(1. AUTHOR’S EDIT: Czech is actually classified as a Slavic language, which indeed takes more from Cyrillic than Latin languages. However, there *is* enough of a Latin influence to not make a complete liar out of me.)