In my new effort to get healthy I decided to stop drinking vodka for breakfast and, instead, go on a walk in the neighborhood across the street. It’s a four lane street, busy all day, quiet at night, but a clear demarcation between my neighborhood – townhomes, high rises, and the metro station – and the “real neighborhood” which is full of 8 million dollar homes on huge lots. Not exaggerating that price point, either.

So our side of the road has a certain style and feel, I suppose. We’re the folks who have had plastic bags stuck in our trees for the past year and, when the kids shoot out a light, it stays out until we complain publicly on Twitter to the town council and they reply “Yeah, you’re on the list, motherfucker.”

And then, just a few feet away, you cross the road and enter into this:

And never the two shall meet even though we’re technically in the same neighborhood. I’ve lived in this particular spot for seven years now and I’ve rarely ventured into the real neighborhood. I always feel slightly out of place back there. Like we’re in some sort of Black Mirror episode where people can look out their windows and see my net worth floating above my head and immediately assume that The Purge has become reality. Most of the houses back there are set up as if they actually are preparing for The Purge with monitoring systems and big fuck off gates. 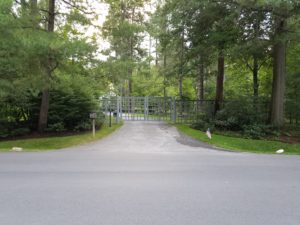 And when I say “monitoring systems,” I’m talking cameras mounted on trees that ominously follow you when you walk by on the sidewalk.

So my “get healthy” program has only moved into the “get 10,000 steps a day” zone and not much more. I’m on the 70 year old man health program, which is fine by me because I have to hurry up and get back home so I can drink all that vodka and snort Drano and lick the inside of the toilet.

I figured, to get in those 10,000 steps, it would be lovely to go wandering through fucking paradise at 6am and gaze longingly at how the really rich people live. Somehow, within only about ten feet after you cross the road, everything descends into a rural calm. At 6am, there are rabbits hopping around peacefully and birds singing. The sounds of the urbanized suburbs and traffic are instantly gone. Ancient trees provide a cool shade even on the steamiest of mornings. I hear music and singing from the houses I pass and, a few blocks in, there’s a burbling stream that passes through several people’s front yards. Even the quality of the light seems to change. A different star shines down on the uber-rich, friends. But we never doubted that, did we?

Today, I paused to take a few photos with the idea of throwing together a blog post. The gate, above, and a couple others. By the time I had snapped four pics with my phone, the police came screaming up. Three cars! I turned on my heel and continued walking. Didn’t get far, though. In full aggression mode the cops interrogated me about my picture taking and whether or not I lived in the area. I said yes and they demanded to know where. At first, I refused to tell them. But I finally broke down because they were starting to circle me like wolves. When he heard the address, the first thing the lead cop said was: “That’s across [the street]!”

It’s important to know your place, I guess. That’s our world. Never cross the street and, if you do, never stop or look up. Maybe walk with your hands stretched out so the swells can see that you’re unarmed. Maybe they’ll let you pass. Probably not.