The Alien by Rotting Corpse

[Note from Nacho — Fellow author Rotting Corpse and I will be posting today about the Nimoy we knew. A Nimoy not in a blue uniform and failing to tell Starfleet about his crippling “problem” that he gets every 7 years. Rotting Corpse’s entry is below, and mine will follow this afternoon…]

———
Growing up, our house was a Star Wars house. History seems to tell us that Star Wars somehow saved science fiction, but I could also make the argument that it ruined a generation of fans for “true” hard sci-fi. That would be another essay for another time I suppose, but for as much as we love Star Wars (and make no mistake, I love it dearly), it makes us feel more than it makes us think.

I was too young to appreciate the original 1977 release of Star Wars, and saw it for the first time during the 1979 re-release at the age of four. It shaped my concept of what the world was. Hell, from ages four to nine, Star Wars was my world. Having only got my first taste a mere year before the 1980 release of The Empire Strikes Back, I was dumbfounded to learn I had to wait a whole three years to see the final chapter of Luke Skywalker’s saga.

While I indulged in many works of sci-fi and fantasy (and even a that young age, horror) to fill my fantasy void in the time before Return of the Jedi, I never quite shined to Star Trek all that much. I first discovered it when the then brand new cable outlet Nickelodeon began running Star Trek, The Animated Series in syndication. All I knew about it was that while it was pretty damned good, it wasn’t quite like Star Wars. Oh, and one of the characters was voiced by the host of another Nickelodeon show, Standby: Lights, Camera, Action. 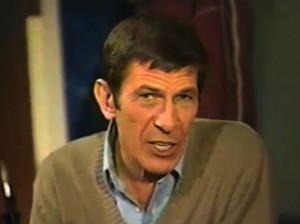 Standby: Lights, Camera, Action was a documentary “making of” show hosted by Leonard Nimoy in which he took his audience behind the scenes of then current fantasy fare like E.T., The Dark Crystal, The Thing, and yes Return of the Jedi. Aimed at kids with a slight educational bent, the show focused mostly on special effects, yet also on other parts of movie making such as script development and directing. In some ways, I could argue that show is what made me a filmmaker. I saw David Naughton turn into a werewolf and Griffin Dunne decompose before my eyes on that show long before I saw John Landis’ An American Werewolf in London. I was also so terrified by whatever that skull thing is at the end of The Keep that I didn’t see the movie (and realize how much it sucked) until I was in college. The show made this kind of imaginary playtime respectable, and most of that was due to Nimoy who took everything he discussed seriously while also reminding us that making movies was a whole lot of fun.

As I grew older, Nimoy kept popping up. My dad introduced me to the the original Star Trek series, also in syndication in the 80s. I wasn’t completely sucked in, and the only episode I truly remember watching from that era was the one where Spock and Kirk fought each other. *That* was almost like Star Wars! I’m sure I saw or slept through Star Trek: The Motion Picture, but it wasn’t until The Wrath of Khan that Trek and Nimoy grabbed me.

Listen, you don’t need me to tell you how great Wrath of Khan is. Director Kevin Smith once said that it was one of those movies where you didn’t have to like sci-fi or know anything about Star Trek and you could get emotionally involved. I saw it for the first time during it’s initial HBO run, so I must have been eight or nine; young enough to fall hook, line, and sinker for the film’s Shakespearean bombast without any knowledge of its literary influences, yet old enough to understand the emotional meaning of Spock’s sacrifice and it’s humbling effect on Kirk’s hubris, even if I had no idea what humility or hubris was in 1983. (Or maybe it was ’84.)

Needless to say, I was all in for The Search for Spock when it was announced. And while the film itself wasn’t anywhere close to being as good as Wrath of Khan (Christ, how could it be?), I was nevertheless satisfied enough to invest in The Voyage Home. Yet that film left me a little empty. While I understand now that it’s probably the best of the TOS films after Wrath of Khan, after the insanely high emotional stakes of Wrath of Khan and the lower but still pretty damn high emotional stakes of Search for Spock, The Voyage Home just didn’t quite grab me. I realized at that point I hadn’t been watching those movies because I was invested in Star Trek, I was doing so because I was invested in Spock.

As a kid, it was difficult for me to express what I found so fascinating about Spock. (Pun intended, I suppose.) There was nothing traditionally “cool” about him and his logical, anal-retentive, and downright stuffy worldview. Yet there was also a subtle badassery underlying his character. The Vulcan neck pinch and mind meld, the stoic bravery, and the firm hand under duress betrayed a bubbling cauldron of emotion beneath the icy exterior. (Zachary Quinto’s interpretation in the ’09 reboot tapped into this even further, emphasizing the conflicting duality of his half-human/half-Vulcan genealogy.) Beneath that calm and controlled exterior seems to beat a heart afire with passion. Spock was somebody you did not want to mess with. 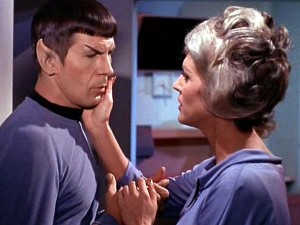 Many TOS episodes keyed into Spock’s inner conflict, and the best of them show him as a man at war with himself. The season one episode “The Naked Time” comes to mind. It’s the famous “fencing Sulu” one where the Enterprise is infected with some kind of space flu that makes everyone go batshit crazy. Spock, infected with the mind altering bug, is overcome with emotion after Nurse Chapel professes her love for him. Afterwards, he stumbles through the corridors of the Enterprise proclaiming “I am in control of my emotions,” before breaking down completely. Later he tells Kirk that he is shamed by his inability to express love for even his own mother. (In typical Kirk fashion, the Captain slaps the shit out of him and tells him to get ahold of himself.)

We dug Nimoy’s Spock because we all like to see ourselves as the smartest guy in the room, completely in control of ourselves, and unlikely to make any mistakes. The reality of course is that underneath we’re that weeping despondent alien crying in the hallway, trying with all our might (yet failing) to keep control of our emotions, to be more than the human animals we are.

There’s another aspect to Spock that I think made him so beloved: He was an alien among a group of humans. By his very nature he was different, yet Spock wasn’t an outcast. In fact, he took great pride is his alienness. His friends respected him for it. For those of us who grew up feeling (and as adults perhaps still feel) that we’re different, that our ideas or looks, or our distaste for the superficial and attraction to deeper meaning set us apart from our peers, this concept of an alien taking pride in his difference was an important lesson. It told us we should embrace our alienness and be who we are, even if we ourselves are conflicted about exactly who that is. Above all things, Nimoy’s Spock taught us that it was okay to be alien, just as long as we also always try to understand what it means to be human. 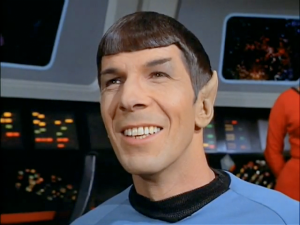