Part of Lonnie Martin’s ongoing blog — Stranger in a Strange Land — where he tells us all about moving to Prague to drink beer and make arthouse movies for a living. His wife is also blogging about the experience.

The four month filmmaking intensive that brought me to Prague has kicked into high gear. Last week, I began two months of intensive classroom work and film screenings coupled with preparation for a short film project. All of a sudden I’m busier than a one legged man in an ass-kicking contest. Having joined forces with two other students, together we’ve started the process of story development and pre-production that will ultimately lead to a 4-7 minute narrative shot on 35mm film.

This is actual celluloid film I’m talking about here. Europeans generally, and the Czechs in particular, are very much aesthetic purists when it comes to cinema. It’s not that they’re resistant to change. The digital revolution is certainly evident here.

Philosophically though, there is the idea that digital filmmaking makes creating movies too easy causing preparation and technique to be ignored. Film costs money. Each second of film has a monetary value. Each moment you’re rolling is precious. With digital, you can shoot all night with no consequences… except maybe pissing off your cast and crew. With film, you have to plan. You have to know what you’re saying and how you want to say it.

There are of course technical and aesthetic differences between film and video as well, but I think they’re probably a snoozer for non-film students. These have to do with things such as color theory, international broadcast standards, and visual psychology; subjects which sort of bore the pants off me and I do this for a living. However, if you’re truly interested, here’s a good jumping off point.

The Czechs’ storied film history is tied to their complicated political one. I fully intend to get deeper into the historical landscape of the Czech Republic in a later blog, but from a filming standpoint, It’s important to know two bits of information:

The first historical event of cinematic significance is the 1938 Munich Agreement in which the allied forces, particularly the UK, all but handed over what was then Czechoslovakia to the Nazis in order to buy themselves preparation time for the big Double W Deuce. The second event is the 1948 communist takeover which began 41 years of communist rule. The communist era especially figures largely into the Czech national identity and into the films of the “Czech New Wave” which lasted between 1963 and 1968, the year Soviet tanks rolled into Václavské Nám?stí (Wenseslas Square) and stayed until 1989’s Velvet Revolution and the fall of the Berlin Wall.

During the communist rule, the Czech film industry was state controlled. This meant that Czech filmmakers had access to funds and resources their more capitalist brethren (and sistern) had to scrounge for. However, the films made during this era were also subject to strict censorship. Most of the films in my list below were banned from public screening and locked in a vault until after 1989. (Communists didn’t throw out anything for fear some higher authority might come along and question why it was thrown out.)

Many of the films shot during the New Wave era originated from FAMU, the school where I currently find myself studying. Though western films were banned by the communist regime in Czechoslavkia, as an educational institution, FAMU had access to them. 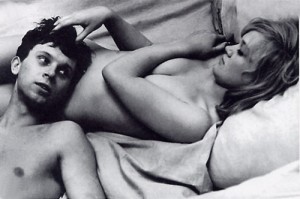 These Western films and ideas were the basis upon which the Czech New Wave aesthetic was built. The tambour of Czech films is quieter and their narratives stronger than in films from French and American counterparts. While there is a similar absurdist humor, it’s of a much darker variety than you find in the French New Wave films of the same period. Many of them deal with the Nazis and WWII, probably because the communists, and by proxy the Russians, hated the Germans as much as the Czechs did and such subject matter was less likely to be censored.

The movement spawned two Oscar winners for Best Foreign Language film. It gave the world Miloš Forman, who would go on to direct U.S. funded films such as One Flew Over the Cuckoo’s Nest, Hair, Amadeus, and The People vs. Larry Flynt. Perhaps most important, it created a unique cinematic language that continues to be practiced today. This cultural legacy stretches beyond the Czech Republic into western Europe and beyond.

Below are trailers for (or clips from) five Czech New Wave films I’ve watched since being in Prague. Give them a try if you’re an adventurous cinephile or just a fan of good movies. I don’t think you’ll be disappointed.

Diamonds of the Night (1964) – This film chronicles the journey of two Jewish boys who escape a train transporting them between concentration camps. Somewhat experimental in structure and continuity of time, it’s a harrowing portrait of survival and the lengths man is willing to go to be free.

The Shop on Main Street (1965) – A poor tinkerer is tapped by his SS brother in law to take over an old Jewish widow’s shop. Something of a pushover, our tinkerer allows the old lady to believe he has simply come to work for him while also having to convince his wife and the Nazis that he’s in control of the situation. At times searingly funny, the stakes get high after he’s encouraged to protect the old widow after news of the coming removal of Jews to the camps.

Closely Watched Trains (1966) – A young train station concierge during the Nazi occupation attempts to have an affair with a female worker, but has some serious performance issues which lead him down a hilarious and sometimes poignant road of despair. Meanwhile, he and his coworkers become embroiled in a plot to blow up a Nazi ammunition train.

Daisies (1966) – Directed by Vera Chytilová, the “First Lady of Czech Cinema,” this is a surreal feminist romp about two girls named Marie who decide they’ve “gone bad.” Banned by the communists because it encouraged “the wasting of food,” the film is utterly insane, completely hilarious, and incredibly fun. Easily my favorite of all the films I’ve watched so far.